Some time has passed since I've written about a pen - but I do have some to show, like this amazing faceted Omas Extra Lucens.


The pen was issued in 2013. 300 pieces were made. The color is labeled as "black" though that hardly covers it. There is black, yes, but it is veined with sparkling golden threads and transparent patches which grant a look at ink reservoir and piston mechanism.

I have to say, when I saw it for the first time my thought was "hmm, that's very transparent indeed - do I like that?" Once the large reservoir is full of ink though I like the appearance very much.

Someone on FPN said that it looked like it was made of sugar and felt just as light. I can relate to that thought very much! I think the faceted barrel somehow adds to that. It's only my second modern Omas and I'm hearing their pens generally are on the lightweight side. Also it was very interesting - and, at first, unsettling - to perceive once again what exactly different companies mean by "a quality pen". This mainly reveals itself in details, like the threading of cap and piston. For instance all of my Pelikan's pistons have felt silky smooth. All of my Montblanc's caps have screwed on firmly, soundlessly and felt extremely reassuring. Some of the newer ones even had some added friction fit, as if to say "Okay, you're closing the cap... it's almost fully screwed on, feel the resistance increasing? There... closed. It won't open again unless you choose to, don't worry about that". On the other hand... plastic feeds. "Precious resin". Et cetera.

Omas obviously places their focus on their nibs and the material of cap and barrel. Italian celluloid just seems to be a class for itself and so is this pen. The large, gleaming single-tone nib rests on an equally large ebonite feed. On the other hand, the cap threads have a rough feel to them and the piston knob took quite a bit more than the usual amount of convincing before moving for the first time, and even now that it moves easily enough it's far from the "smooooth" gliding feeling of a German piston filler (or even a TWSBI for that matter).


Though I'm usually not a fan of lightweight pens this one is a really nice writer, it's one of those pens that seem to become part of the hand.

Here's a look at the ink reservoir. That turquoise gemstone is Waterman South Sea Blue - which is just the right ink for this pen because the nib is nicely soft, very smooth and very wet. The first ink I filled it with was the very free-flowing Omas Blue and while I like a wet nib as much as anyone the combination was unbearable.

The pen is fitted with a factory broad nib with a negligible amount of line variation. I haven't posted  a writing sample for now because it will make for a nice cursive italic before long.

In direct sunlight the golden veins become very sparkly and prominent; in indirect lighting, however, the pen remains subtle enough to be a daily writer.


Next to a Montblanc 149 for reference: 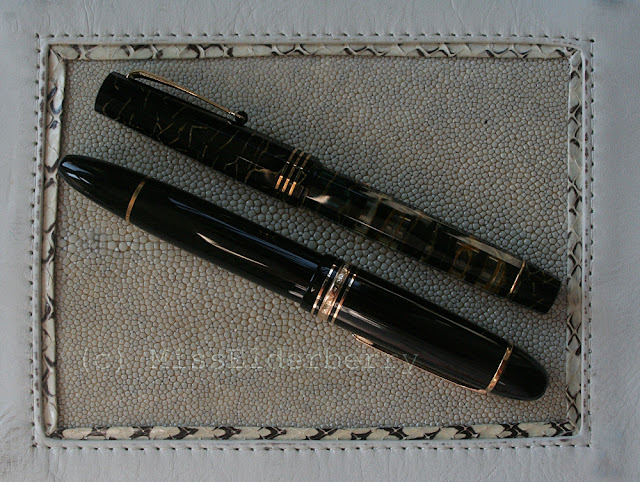 How do you like this one or Omas pens in general?
Posted by MissElderberry at 5:15 PM