Occasionally - in fact, sometimes I think it's more often than not - it's not perfection that turns a nice thing into a great thing but the carefully placed imperfections in it. I've heard that Arabian carpet weavers purposefully put some mistakes into their work because they believe no human is able - and allowed - to claim perfection.
(I think this isn't a bad approach at all, though I'm not sharing the religious background. Why not carefully put a few mistakes into your letter, your painting, your crafting project? That would take so much pressure away.)

With this pen, Nakaya has gone a deliberate step farther and added not only imperfections but downright destructed elements to their work of art. Flawless planes of amber-coloured lacquer are broken here and there where the surface appears to have cracked, jagged outlines exposing the dull ebonite underneath.
This doesn't only look cool - to me anyway - but also feels interesting to the touch. It becomes apparent how thick the lacquer layer - or in fact, the many layers - on the ebonite corpus actually is, that it really is thinner at the gripping section, that most of the lacquer seems to be very light with only a slight touch of a dark varnish over it.

This model is the mid-sized Portable Writer. The Negoro design is often done on a Piccolo, which I was a bit ambivalent about because, though I do like the Piccolo, I sometimes catch myself thinking "Hey, a bunch of money and all I'm going to get is such a small pen?". (Yes, that's irrational, absolutely! But well, at the moment that I decided to take the plunge on a Negoro and found out that nibs.com had one on a Portable size, I didn't take too long to make up my mind.)

Love these cracks. They seem to enhance the glossy surface rather than destroy it.

The only thing I am a little ambivalent about on this pen - and this may come as a surprise - is the clip. I'm having a love/hate-relationship to clips, because despite I hardly ever clip the pens to anything and especially the Nakaya clips are not really beautiful to my eye, I appreciate their stopping the pen from rolling around. Yes, Nakaya do roll stoppers, but they're definitely not my cup of tea.

On the Negoro, I decided to go for the clip. That skilfully placed crack near the clip band.

I also decided I'm going to do more size comparisons in the future because I always find them extremely helpful myself when reading about pens I don't know about. Here's next to a Montblanc 149, the Montblanc is a little fatter - though this Portable is actually quite a lot fatter than my other Nakayas, their sizes always varying a bit because they are hand turned - but else there's not much difference here. The Nakaya is a little lighter than the Montblanc when capped but a little heavier when uncapped. The cap doesn't post. 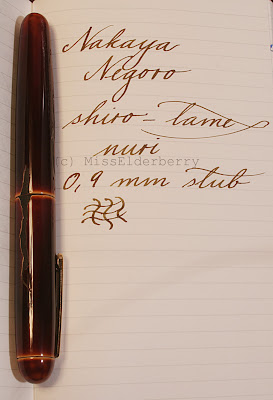 The nib is a plain gold 0.9 mm stub done by John Mottishaw. Like all my pens I've got from him so far it works flawlessly, juicy and smooth, and this width is my favourite. I already have a cursive italic from him in the same size, I'll compare them some time.

Like all Nakayas, it's a c/c filler. Currently inked with Sailor Jentle Rikyu Cha (I have to write more about this ink sometime. This ink...! When I tried it first I thought "uh, mud". But it's so much more than that. There's green in it, olive, brown shading... I'll show you.)
Posted by MissElderberry at 10:10 AM