Christmas is almost here and between last minute shopping and cleaning the house before our usual holiday journey to one of our parents's homes I've got something special to show: a Stipula for Mercury "Francois de Trixhes" fountain pen in gorgeous grey and blue celluloid. As far as I know it's about 15 years old.


The pen is imprinted "Mercury, Francois de Trixhes" and was limited to 80 pieces. According to Regina Martini, who I bought this from, Stipula manufactured these as well as the "Impero" edition for Tibaldi - which would explain why it's the same celluloid. It's amazing! I've never seen a color like this before, the vivid blue veins are striking, like a black and white picture slowly disintegrating and color bursting through the cracks. 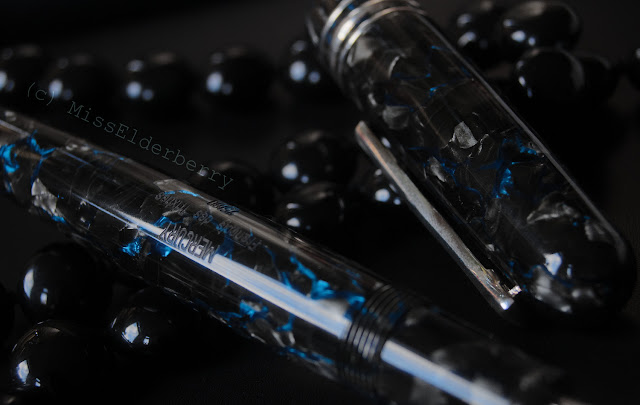 Also this was the first pen where I could actually smell the camphor note of the celluloid by sniffing the cap (though after I knew what to look for I also succeeded in detecting the same smell with some Omas pens).

The pen is fitted with a rhodium plated Stipula italic which could be somewhat wetter but is nicely soft. 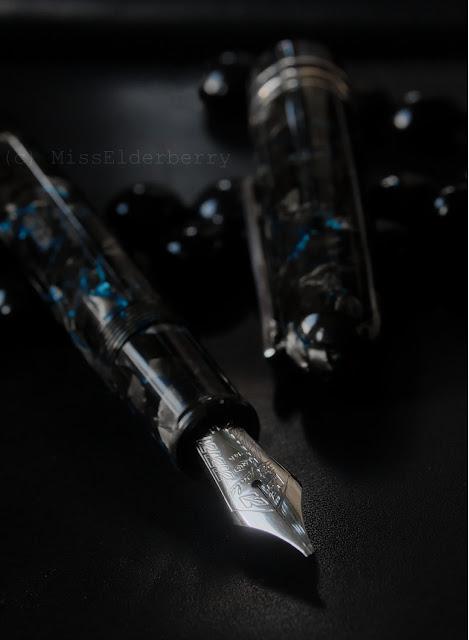 Sadly I have no idea who Francois des Trixhes is which makes me feel somewhat inadequate but can't be helped as google doesn't seem to know him either. Any ideas, anyone? 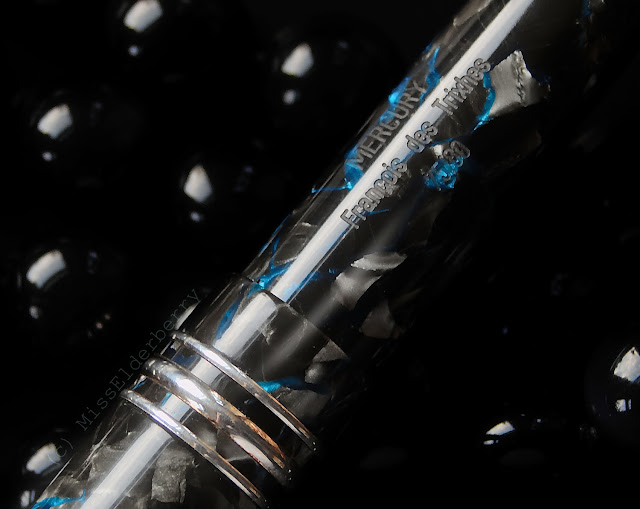 As is to be expected, the pen is very lightweight (25 g capped, 17 g uncapped) but not overly slim so it sits nicely in your hand. It's filled with converter or cartridges. Once I get the nib to write as I'd like it to I might add a writing sample.

Tom Westerich is selling a Goldfink button filler which he made of this same celluloid so he still seems to have some of it. It looks great and I don't have a button filler yet so I'm severely tempted - the price helps me resist though!
Posted by MissElderberry at 8:17 AM